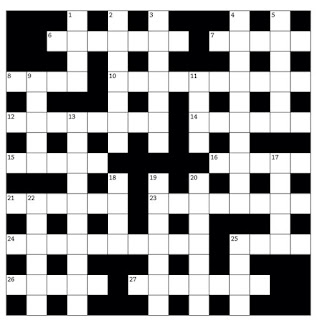 Cracking PDF version
Solutions should be entered as usual into the grid. Once completed, the puzzle takes the form of a safe dial which must be cracked to reveal three two-word items hidden within it. The grid can be thought of as a series of square rings; the first ring is 15 x 15 squares (comprising the top and bottom rows and the first and last columns); the second ring is immediately inside it and is 13 x 13 squares, and so on to the seventh ring, which is 3 x 3 squares. The correct combination of rotations will reveal the safe's contents. The rings contain the letters entered in the grid, which shuffle round clockwise or anticlockwise over the black and white squares below them; the positions of the black and white squares in the grid remain unaltered as the rings of letters rotate. The first ring would require a rotation of 56 to return to its original position, the second ring would require a rotation of 48, and so on.
You have a codebook which tells you that the required rotations will be given as A=6, B=6, C=8, D=8, E=9, F=10 and G=12. However, you do not know which rotations should be to the right (clockwise) and which to the left (anticlockwise), nor do you know which ring needs to be rotated by which distance. This information is given by single extra letters generated by the wordplay for fourteen clues. These fourteen extra letters comprise seven pairs, specifying the moves for rings 1 to 7 in turn; the first letter in each pair specifies the number of steps to rotate (as one of the letters A to G) and the second specifies a direction (L or R). Thus, DR would encode ‘rotate eight positions clockwise’; FL would encode ‘rotate ten positions anticlockwise’.
Solvers should submit the plain (uncracked) version of the grid, plus the three items it contains.
Across
6: I’m in the Middle East; little sibling follows, making an impression (7)
7: Short-haired dog does its business half-heartedly, turning to finish (3,2)
8: Keep back before neutron blast (4)
10: Might it have a twist which would keep us in suspense? (7,3)
12: Victory: Ireland gets six points from Austria (8)
14: Come clean about comment in pieces of work (6)
15: Proceed immediately to read Guardian’s leaders, being absorbed (5)
16: Charges at it, both taken aback (5)
21: Wind blowing hypersensitizes - being uneasy, sense it is to be avoided (6)
23: Clocking Viking being bitten by boar, start to yell (8)
24: Pot and pan: I’m behind with tidying up (6,4)
25: Act as directed by the Office for Budget Responsibility and Ernst & Young (4)
26: Platform-like flower? (5)
27: Floral ornament from Romania put on sofa (7)
Down
1: Some partaking in neat spirit (4)
2: Type of oil painting or sculpture stored in the freezer, oddly (3,4)
3: Rising, judge admits Eric, being annoyed (ie comparatively angry) (7)
4: ‘Stokes is incredible’, says Spooner – but this isn’t what he’d usually throw (6,4)
5: Sick Highland cow’s eaten arsenic (6)
9: Similar to one found in a body of water (5)
11: Encyclopaedia covers revolutionary concept (4)
13: Most defiant? His gauntlet has been thrown… (10)
17: A couple under pressure finally break a leg (5)
18: Irishwoman sat in lounge, drinking (4)
19: Not a help for transportation? Quite the opposite! (7)
20: Gathered swamp monster upset Johnny? (7)
22: The Gods of Heliopolis, encompassing Nephthys, Nut etc.; Atum, divine, at the summit (6)
25: One’s used to pledge love by turncoat husband (4)
To enter this competition, send your entry as an image or in list format the plain version and the 3 items to ccpuzzles@talktalk.net before 8th April 2021. The first correct entry drawn from the hat will receive a book from the Chambers range, which has been donated by Chambers.
Posted by Derek Harrison at 22:50